Hearts & BBDO Dallas tapped us to do this CG-rich ad for AT&T Business. It was an ensemble effort that used every facet of our team, from editorial to motion graphics to CG.

We started with a detailed animatic where we edited all the shots in place, then once the edit was approved we used those shot lengths to build our computer graphics shots for our CG pipleline. Meanwhile, we shot the live action plates and did motion tracking so that we could marry the CG to the plates. This was important for facilitating the challenging opening effect where we zoom in real time from the practical live plate to the CG city, which rises up from the surface of the Flexware that the talent is holding.

Our motion graphics and finishing team did the particle steam effects, which had to be imported into the CG scenes and composited so that the complex geometry of the buildings could properly occlude (block out) the effect. Motion graphics also were used to create the globe interface on the iPad the talent is holding.

I used Flame heavily in the pre-CG stage to color the shots and prepare them for the other departments. The plates also needed retouching to deal with fabric wrinkles and we added the name badge in post that the talent is wearing. I also dealt with the zoom-in to the city from the CG to the live action plate, which needed a projection map and mattes to get the effect to feel right. I also created the complex zoom-out effect at the end of the spot that gets us from the isometric view of the city back out to the talent holding the router at the end, complete with clouds and balloons in the sky. 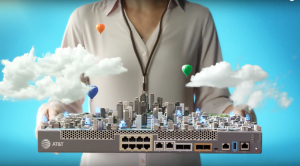 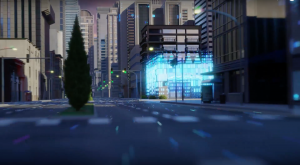 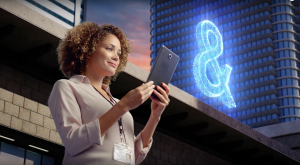 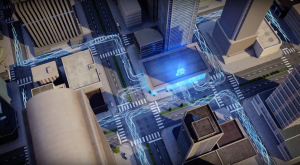 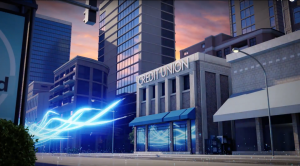 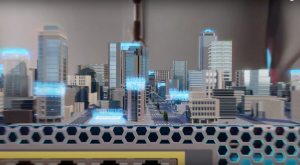